In this article we will explain the following about the “Tasbih”:

The word “tasbih” or “tasbeeh” is a verbal noun derived from the II form Arabic verb sīn-bāʾ-ḥāʾ (ح-ب-س). This verb means “to glorify GOD”. So the word “tasbih” literally means “glorification of God” or “declaring GOD sublime”.

The general purpose of a tasbih is to keep count when performing a dhikr (remembrance of Allah-God) or a prayer. Of course, as a tool, it can be used to keep count for the repetition of any religious or spiritual practice, verse of Quran or litany.

The name “tasbih”, although commonly used in some countries including North America and the West in general, it is more correctly referred to as a “misbaha”, “subha” or “sibha” among Arabic speaking Muslims. These three Arabic words are all derived from the same root that “tasbih” is derived from but would more accurately depict an object used to glorify or remember GOD. Nonetheless, the word tasbih has been adopted worldwide and is widely accepted as referring to the prayer beads used by Muslims. Indonesians used the word “tasbih” whereas the Turks will often spell it “tespih”.

It is said that the first tasbih or Muslim Prayer Beads was made by Lady Fatimah RA, the daughter of the Prophet Muhammad SAW. This first tasbih was made by tying a certain number of knots on a string, in the shape of beads, to keep track of how many prayers or dhikrs she did. It is related that the Prophet SAW gave her three short special dhikrs to say after each of the five daily prayers. She repeated each of these dhikrs 33 times or 34 times, thus most tasbihs have 99 or 100 beads. A brief examination of the origins of the word “bead” itself, seems to reveal that it comes from an Old English word gebed, or bede – meaning prayer. Tasbihs were also said to be made from date seeds in the earlier days of Islam. 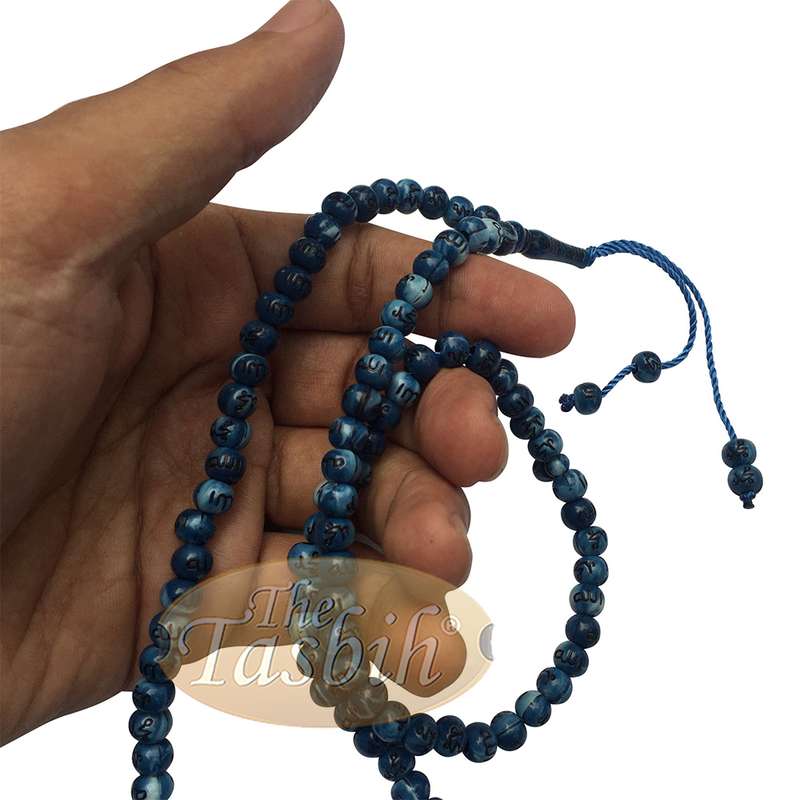 A Tasbih or Muslim Prayer Beads can be made from any material or substance which can be formed into a bead and put on a string. Each individual may have their own preference when choosing the correct tasbih to use for performing their dhikrs or prayers. Some prefer stone beads, some seeds, and some plastic, but the most common material used for tasbihs is wood. Wood is the most frequently used material for tasbihs, and is widely preferred because the beads are easy to make and lightweight. Sterling silver tasbihs are also becoming popular to give as gifts or dowries.

The number of beads on a tasbih may differ but the most common is the 99-bead and smaller 33-bead count tasbih. There are special tasbihs made for different Sufi orders with specific placement of separator beads for their particular practices. Sets of 200-bead, 500-bead, and 1000-bead tasbihs are also used for extensive repetitions but are also less common.

Tasbihs have a longer tubular sculpted bead at the top, often called the alif or imam bead. Imam meaning “the leader of the prayer”. The next common element is the divider beads, also known as Muazzin (one who calls to prayer) beads. These are to separate the sections for easier counting. In addition, a Muslim tasbih may have a movable space marker and/or an extra counter attached to one side or the top for longer repetitions. Finally, above the imam is the tassel which also comes in different forms.

The Islamic or Muslim Tasbih is used similar to the Christian Rosary. It is a tool to keep count of your dhikr, chants, prayers, or litanies. You simply move your finger or thumb and pull each bead towards you with repeated prayer or dhikr.

This short article is intended to give you a basic idea of what a Tasbih or Muslim Prayer is all about.

The Benefits of a Good Tasbih

Having a good tasbih, also known as Muslim prayer beads, is a must for a…